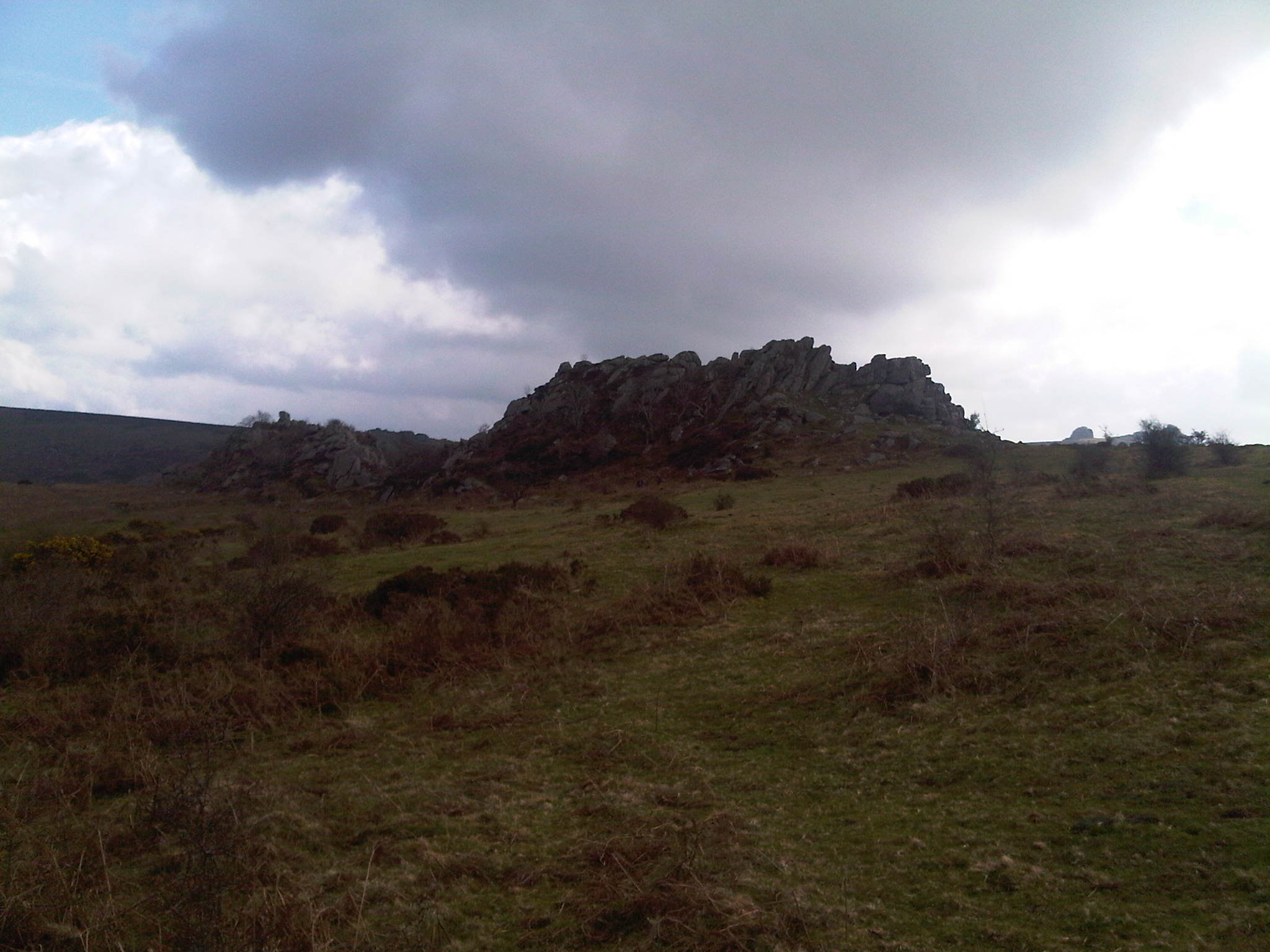 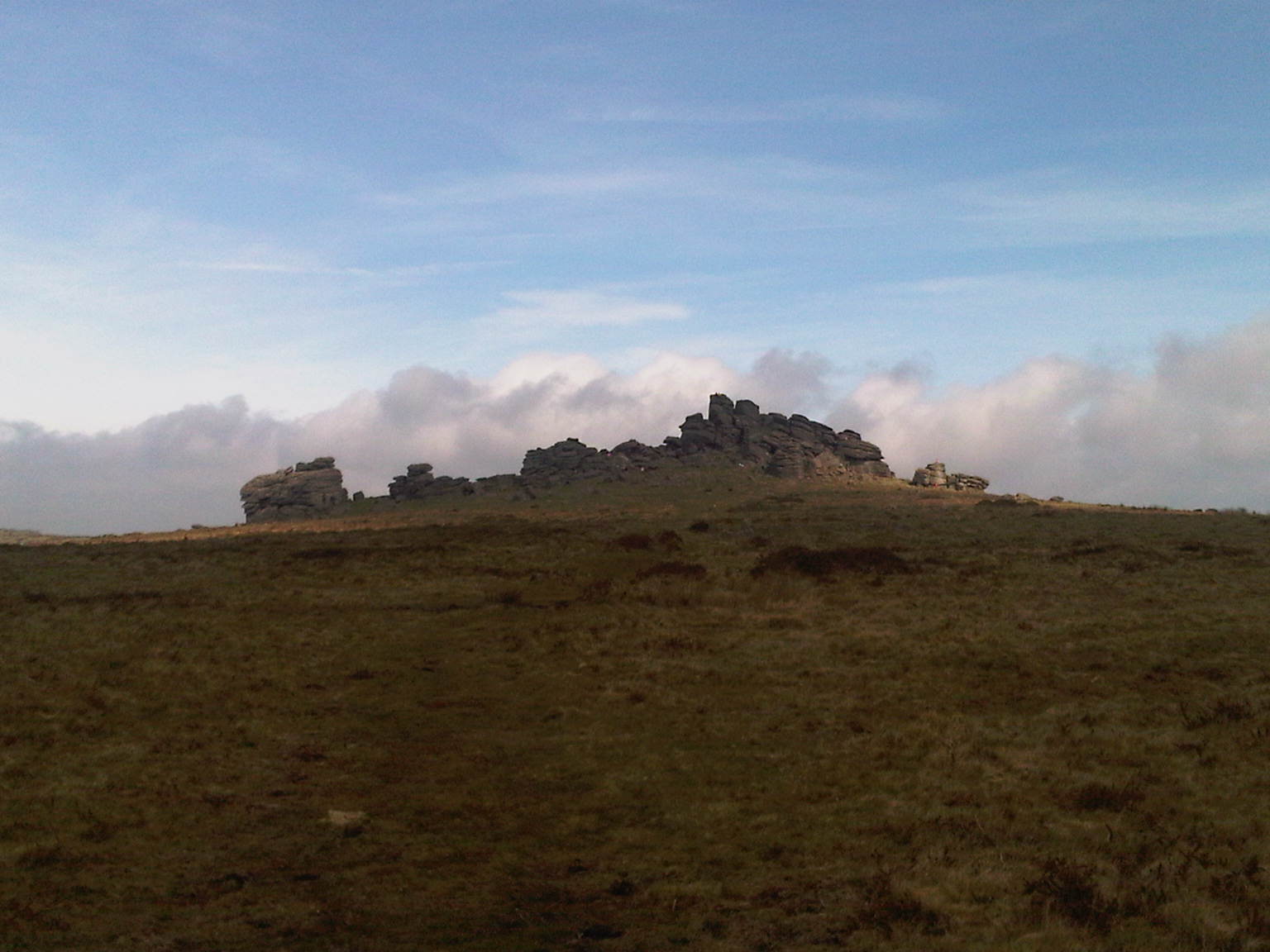 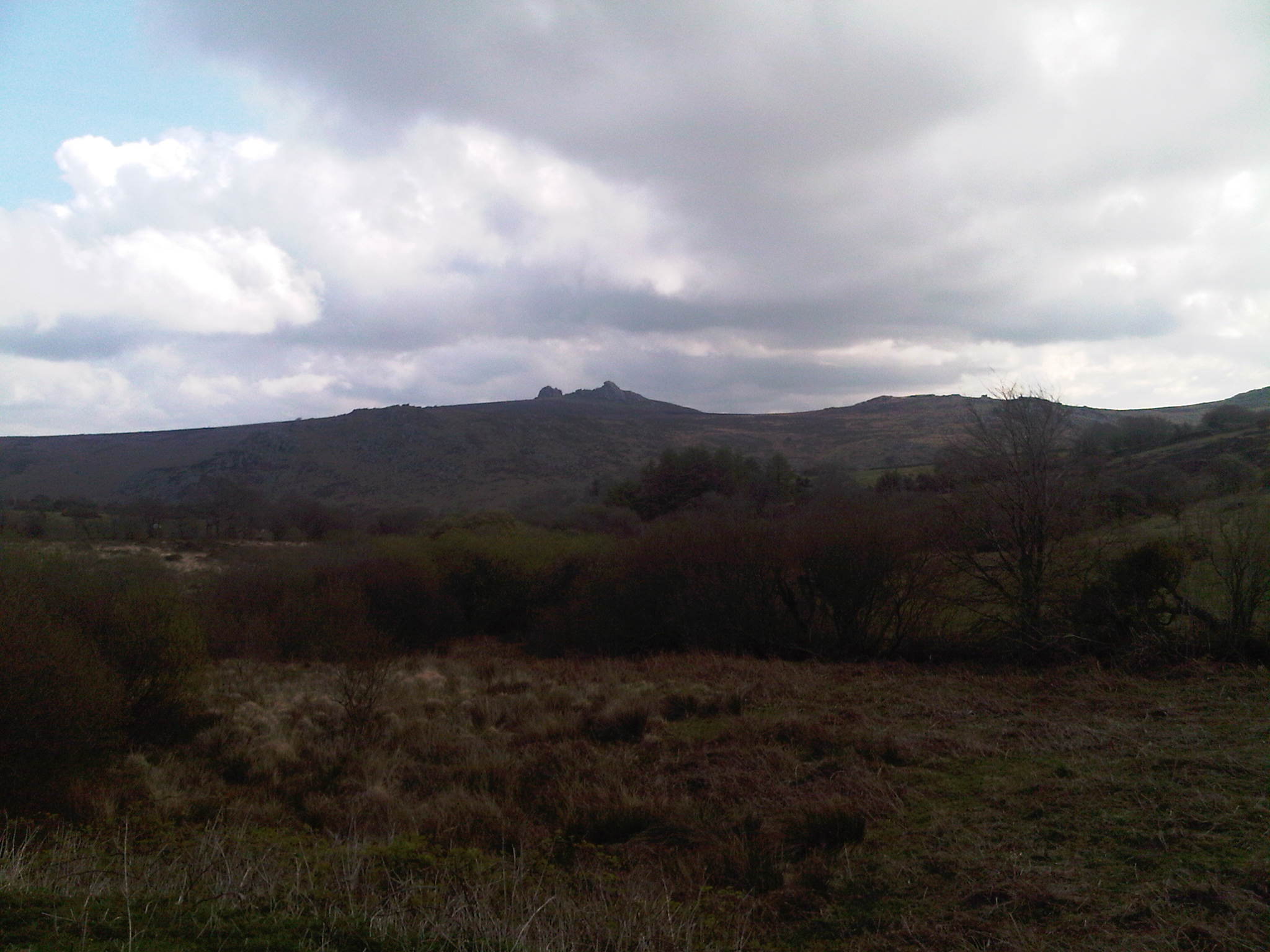 I wanted to go for a walk today. Tommo couldn’t make it because he was going paddling in Newquay, Monty was recovering from his broken ankle and I’d lost Steve’s phone number. So, on my own I set off on a long drive for a short walk on Dartmoor.

I left Backwell in the morning and headed down the M5 dodging traffic cones and Sunday drivers doing crosswords in the middle lane. Soon, I was free from the melee and on the A38 heading towards Bovey Tracey. It wasn’t long before I was taking Moor Care, and was at Haytor Rocks. The early warning signs that this wasn’t going to be a lonely desolate walk on Dartmoor were apparent…the car park was overflowing onto the road and there were literally hundreds of pairs of Wellington Boots making their way to the summit. I dodged a dog that was taking its master for a walk and carried on to park in the car park at Swallerton Gate. On my arrival there, with my window wound down and the smell of fried onion from the Hound of The Basket Meals wafting in, I drove round the small car park three times looking for a space to squeeze the car into. Alas, there was nowhere, so I headed back to the nearest lay-by. Parked and booted up, I set off back towards Hound Tor.

Admiring the view towards Greator Rocks and Haytor Rocks I passed the medieval settlement where my relatives used to live before heading down towards Becka Brook. This brook is formed in the valley between Hound Tor and Saddle Tor and I believe takes its name from a now famous ex Chief Executive Officer of News International. I wondered as I crossed the clapper bridge there, that in days gone past if she had sat there and dangled her feet into the water without a care in the world. What I thought was paparazzi there turned out to be a chap with binoculars and a dog. 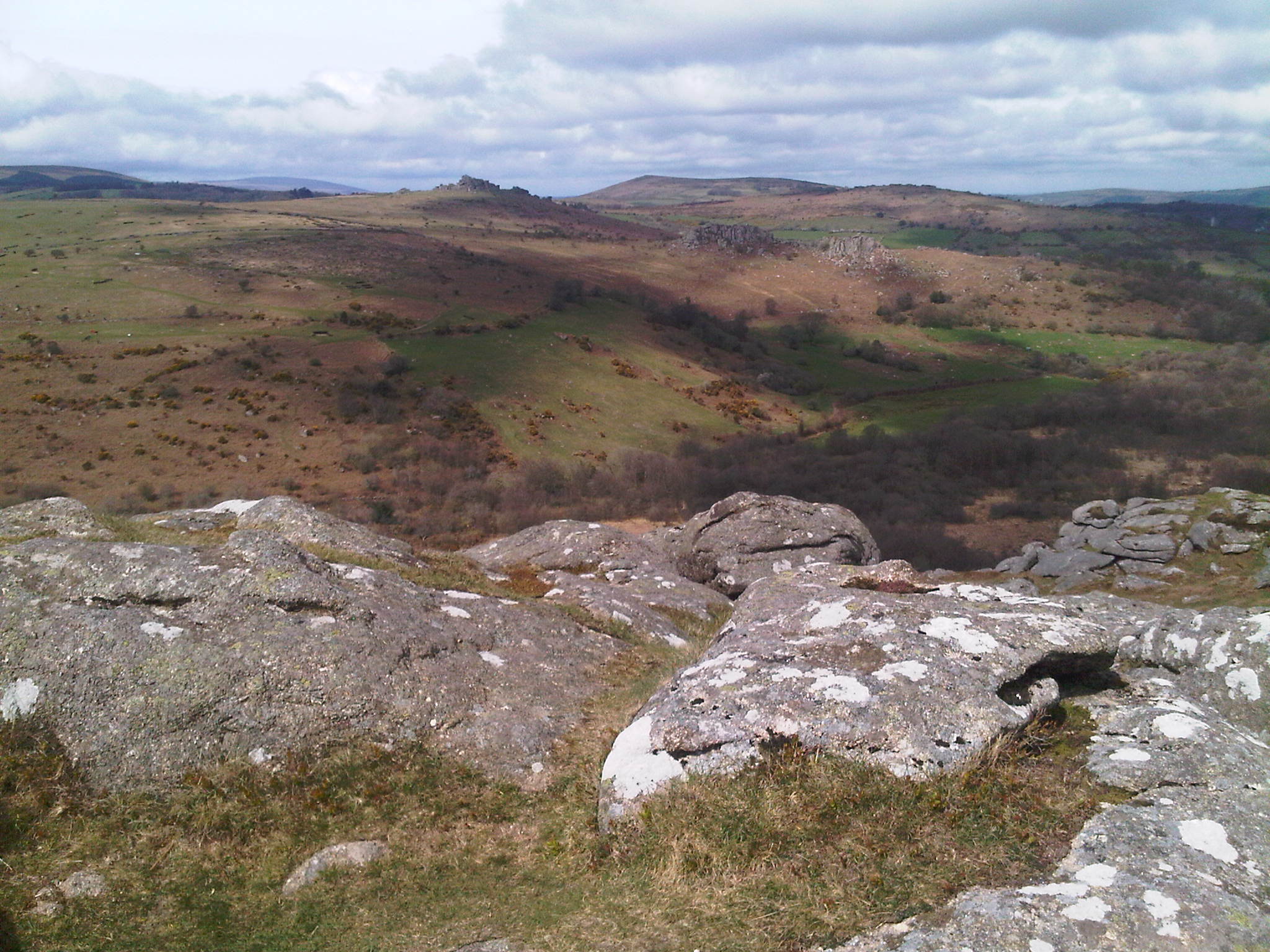 Looking Back Towards Hound Tor and Greator Rocks 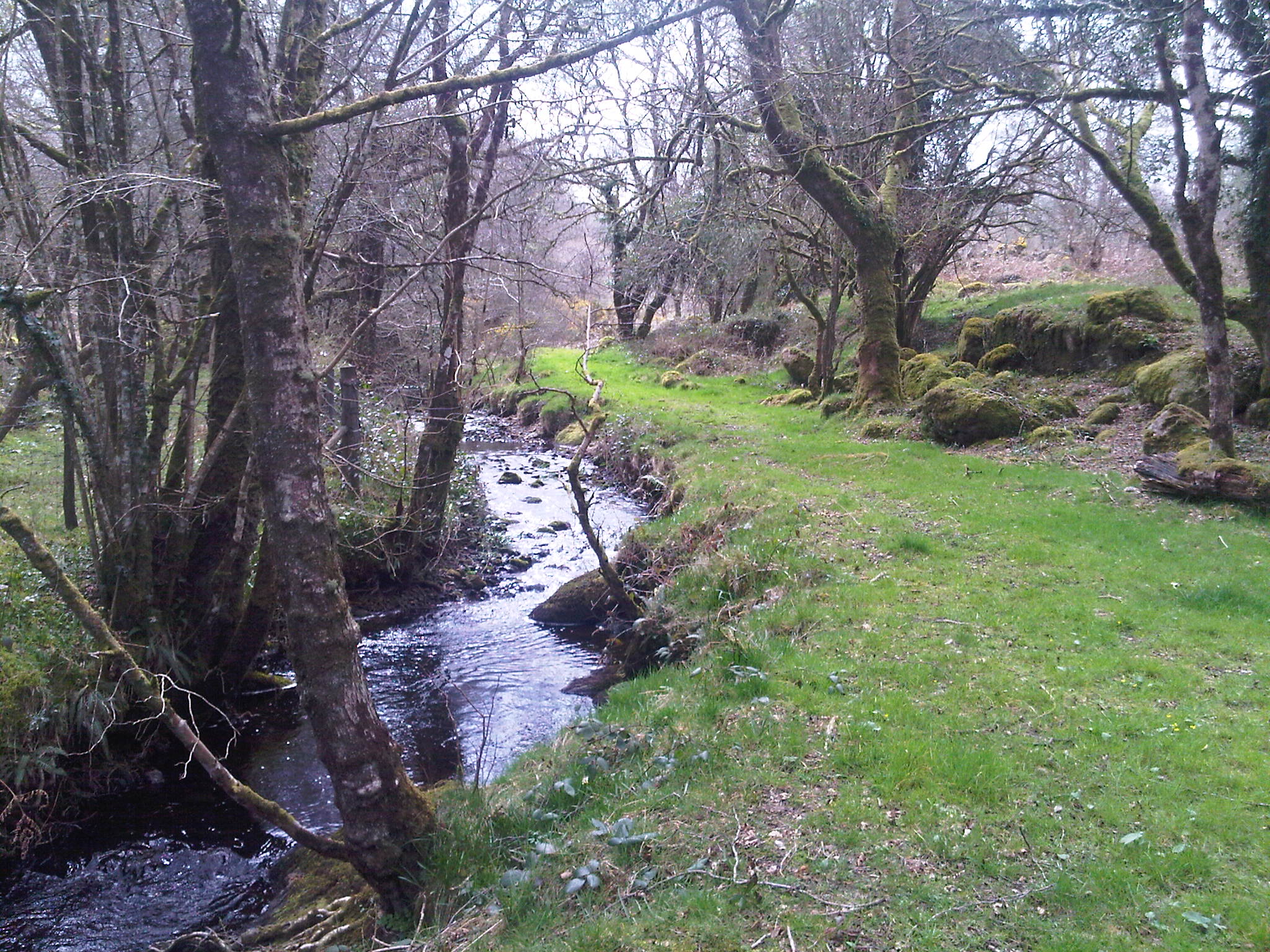 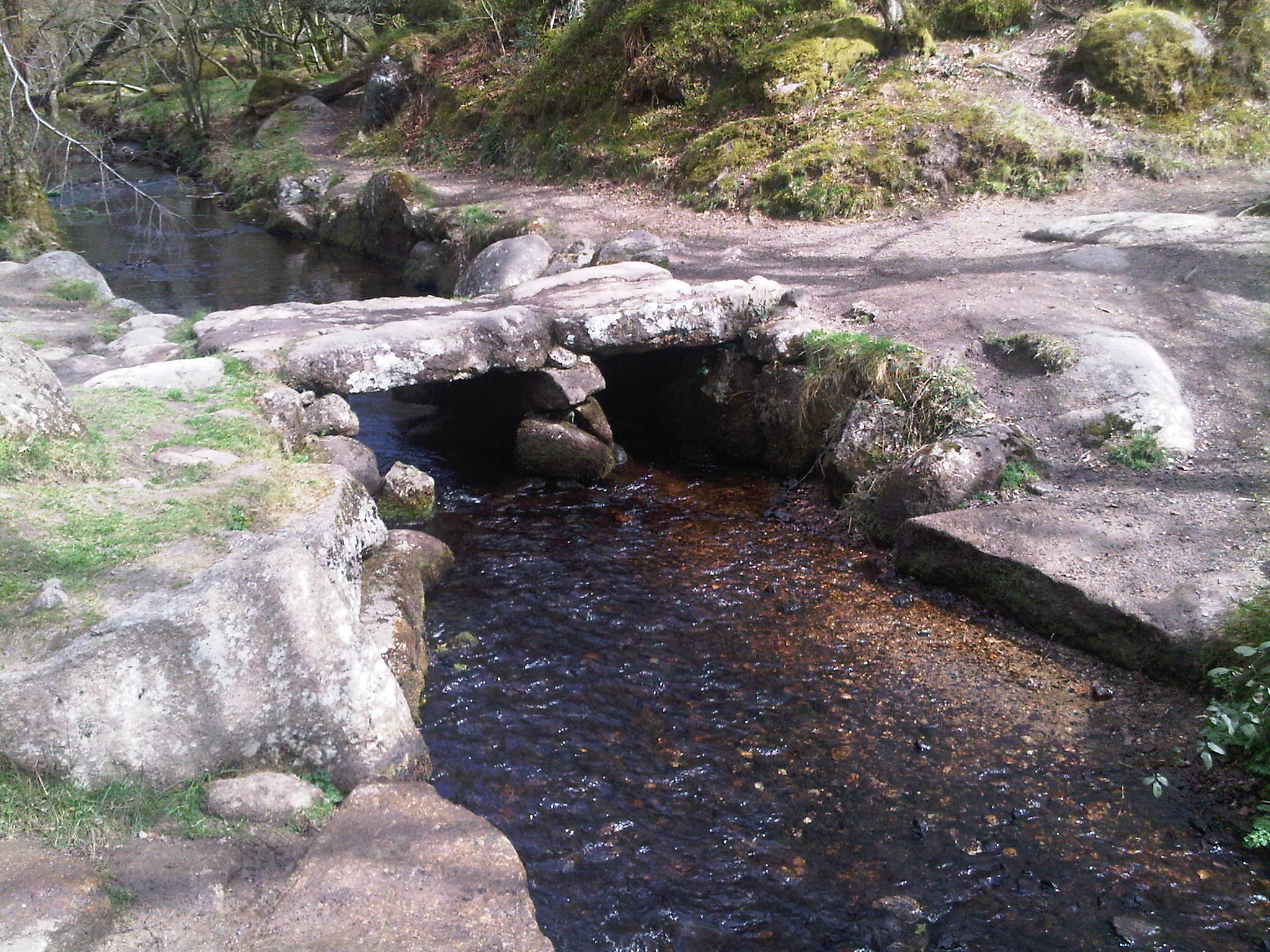 Taking no chances I made my way up the side of the valley climbing towards the outcrop of rocks. Stopping not only to catch my breath but to turn and to admire the view from where I came. Okay, so I stopped to catch my breath. An efficient hill climber I am not.
Once at the summit I headed towards Holwell Tor where I planned to eat my lunch. Between here and there you can see remains of the tramway that used to run around this area servicing the granite mines long since gone. A tramway on Dartmoor I hear you say…don’t believe me? Then read about the Haytor Granite Tramway

After lunch I set off towards Haytor Rocks to join the hundreds of other tourists. Once again crossing the tramway I poked my nose into one of the old quarries before continuing up the slope and picking my way through the boulders that litter the base of Haytor Rock. This place is extremely popular with people parking their cars in the car park and walking the 300 meters to the top. It is also extremely popular with climbers, and I’ve even seen people paragliding from it. I stood out from the crowd a little because I had a rucksack and walking boots on, and before shouts of Oi Rambler came forth I headed down and towards Saddle Tor. 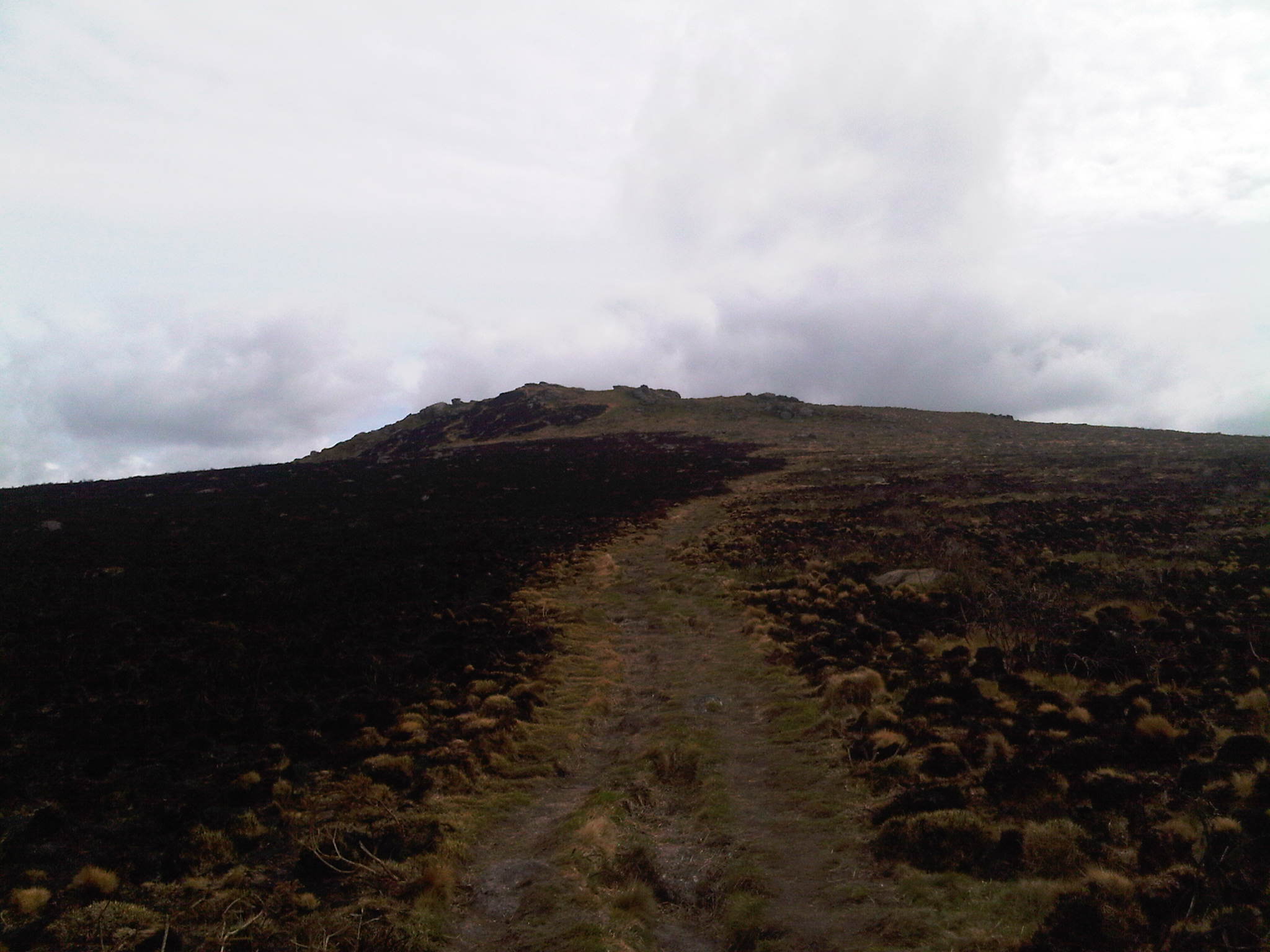 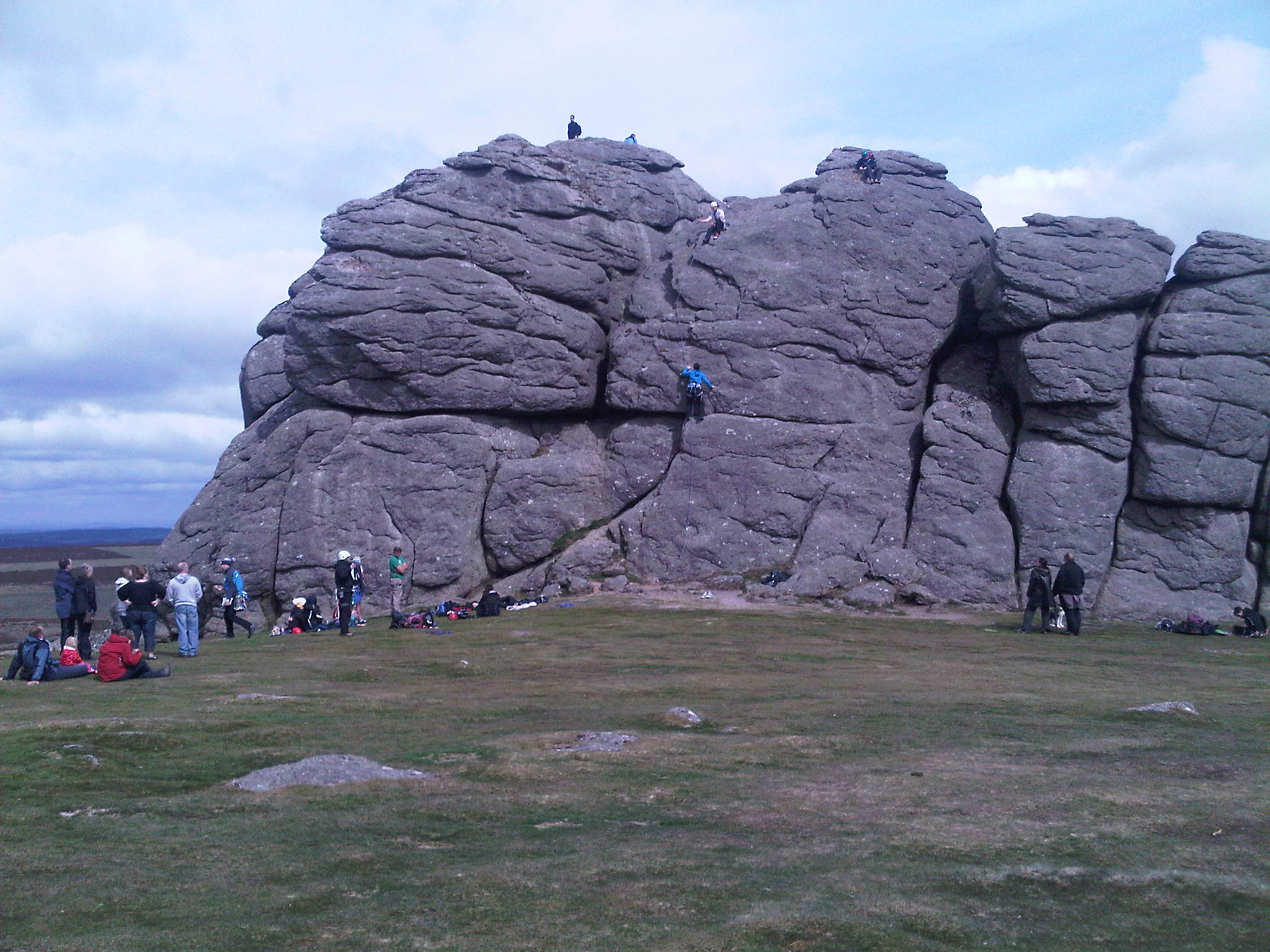 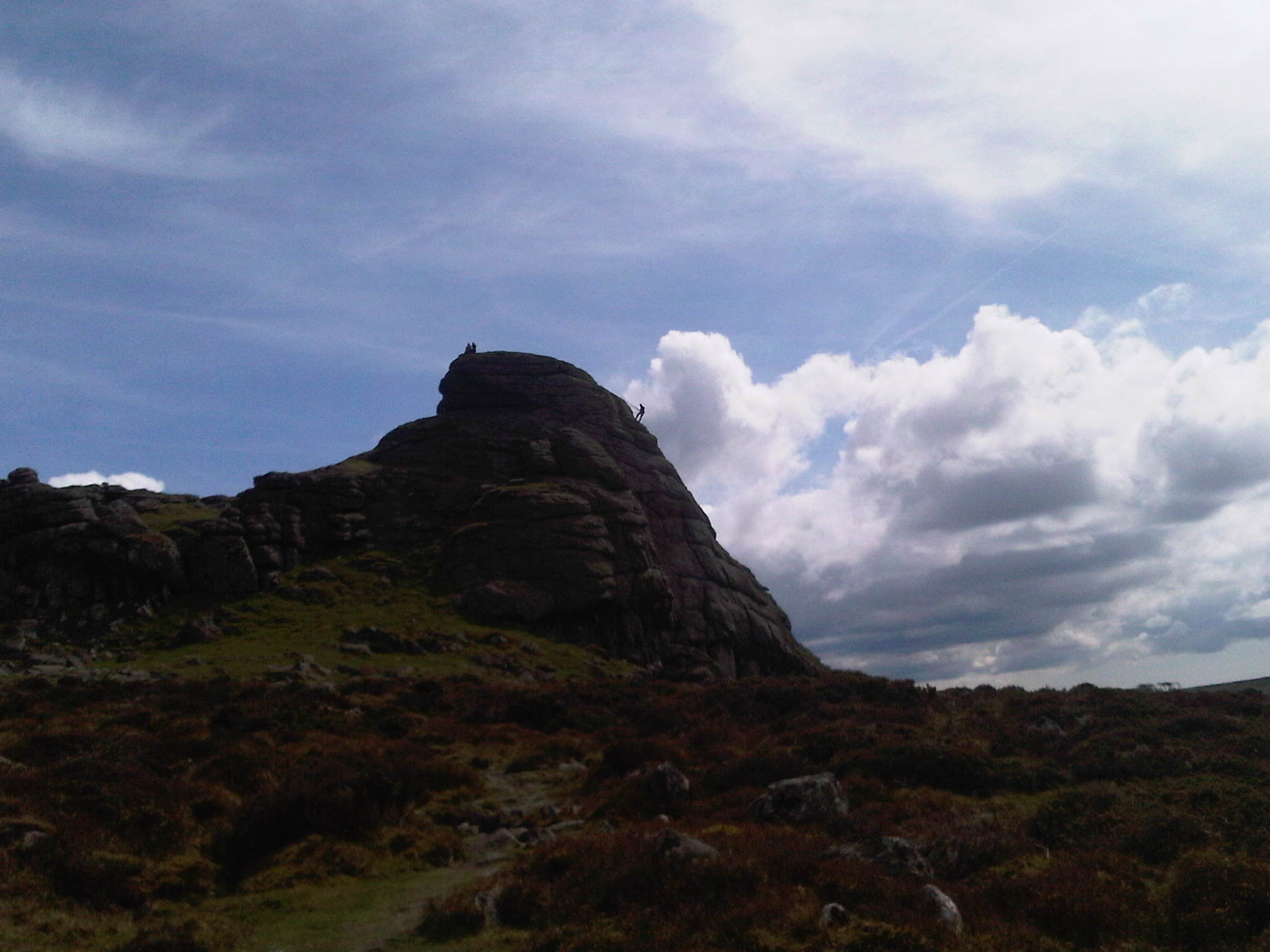 Once at Saddle Tor I looked over towards Rippon Tor and decided that as this was on my shortening list of Tors that I’d not been to the top of, today I would climb it. I walked down to the cattle grid on the road and set off up-hill again. Rippon Tor is one of the highest around, and the trig point at the top has a cairn that has adapted into a shelter around it. The sun was out today and the breeze was only moderate so this didn’t provide me with much noticeable protection, but I would have been grateful of it if the weather had been worse.

With my breath caught and the view admired I set off down to the road again before heading back towards the car. On my way I caught sight of some Dartmoor ponies. These being nervous creatures I though I’d take the opportunity to take their picture before they ran away. I got closer and closer, and they didn’t even move. Only when I reached out to pat one of them did they take any notice of me. They looked like Dartmoor ponies but they didn’t act like them and I imagined them getting their hair and make-up done before being driven in a horse box by their owner, left at the side of the road for the tourists to pet before being collected and returned to their 5 star stables at night time. Still, as I didn’t see the hound of the Baskervilles or the beast of Dartmoor these would have to do. 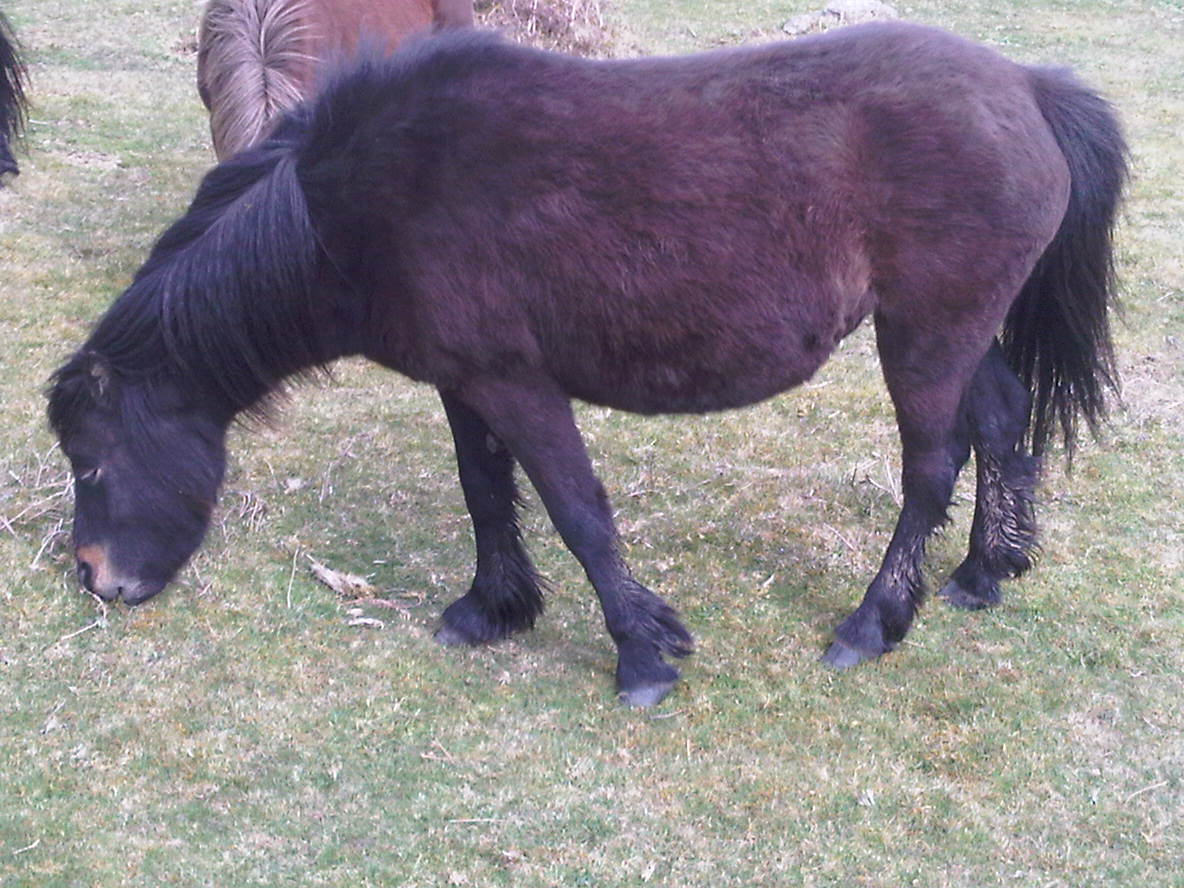 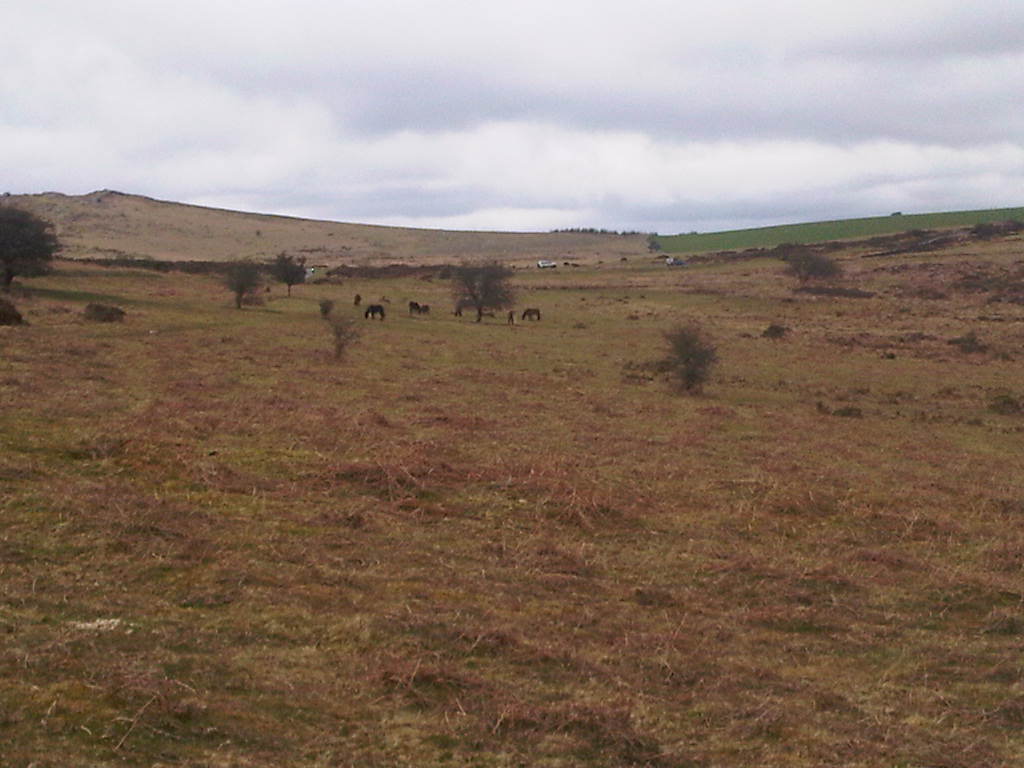 At The Top Of Rippon Tor

Since my school days when I took part in Ten Tors, I’ve walked hundreds of miles on Dartmoor and I really love the place; I try and get there as often as I can. If you fancy doing a quick safe walk in this amazing place my .gpx file is here. On a note of caution, although this walk is never far from a road and there are no firing ranges in the area, Dartmoor can be a hostile place. If you are inexperienced you should read safety advice for walking on Dartmoor before setting out.